The University of Dayton will award an honorary doctoral degree in humanities to Brother Raymond L. Fitz, S.M. ’64, the longest-serving president in University history and a committed community and faith leader who has dedicated his life to educating young people and addressing critical social justice issues. 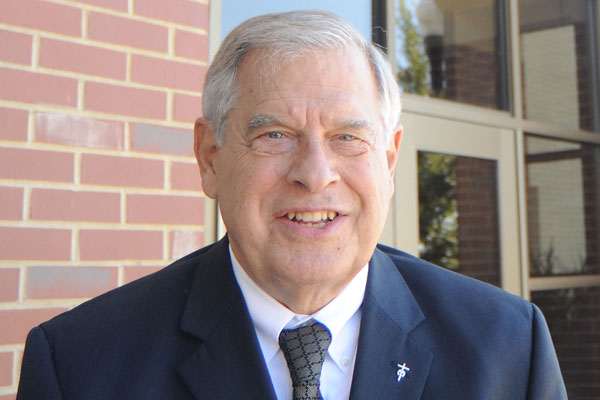 Fitz will receive the honor April 1 during “The Common Good in a Divided City,” a University-sponsored conference focused on the need for regional solidarity — an issue championed by Fitz during and after his presidency.

Fondly known as “Brother Ray,” Fitz’s name became synonymous with UD during his 23-year tenure as president, which began in 1979 and during which he guided the University and surrounding community through a period of substantial change and revitalization. By the time he left the presidency in 2002, the University had experienced significant growth in student enrollment and positioned itself at the center of an economic revival that transformed the southern edge of the city into a thriving business and residential district.

His presidency was marked by the active engagement of the University and his personal involvement in some of the most pressing needs of the Dayton community — poverty, racism and other social concerns that affect children and families. His work, which has spanned more than 50 years, is grounded in the Catholic Intellectual Tradition and the Marianists’ signature emphasis on community.

“This honor is not about recognizing Brother Ray, the president emeritus, this is about Brother Ray the scholar, the faculty member, the citizen of the community, and the committed adherent to Catholic social teaching,” said University President Eric F. Spina. “Through Brother Ray’s deep belief and understanding of Catholic Social Teaching and social justice, he takes the core tenet of Catholicism and applies it to all that he does.”

“Through Brother Ray’s deep belief and understanding of Catholic Social Teaching and social justice, he takes the core tenet of Catholicism and applies it to all that he does.”

Fitz joined the Society of Mary in 1960. While living in the Marianist community at Mount St. John in Beavercreek, Ohio, and pursuing a bachelor’s degree in electrical engineering at UD, he met Father William J. Ferree, S.M., who had written The Act of Social Justice as his doctoral thesis.

“He was a very strong mentor for me,” Fitz said. “He really helped us understand the role of social justice, which was asking how people could work together to change the institutions of society. That was something that stuck with me and that I took with me throughout my life.”

Father James Fitz, S.M. ’68, UD’s vice president for mission and rector, said that Ray Fitz’s work as UD president and his contributions after his tenure have had a “razor focus on justice.”

“For us as Marianist religious, education is a privileged means of formation in faith,” said Father Fitz. “Through this means we aim to sow, cultivate and strengthen the Christian spirit and help it flourish in the human race. Brother Ray has been an outstanding example of that commitment.  Our faith leads us to a conversion of heart and to unity with those who struggle for justice, freedom and dignity. It moves us always to work for peace through reconciliation and healing of peoples and communities. If you have had a conversation with Brother Ray, you know that the commitment to justice comes from his heart and from his Marianist religious vocation.”

Engineering for the common good

Born in Akron, Ohio, to Raymond Fitz ’39 and Mary Louise Fitz, the future Brother Ray was a football standout at St. Vincent’s High School who received a football scholarship to attend the University of Detroit. A higher calling, however, led him to enter the novitiate of the Society of Mary.

He graduated with honors from UD in 1964. He was joined at UD by younger brother, James Fitz, now UD’s vice president of mission and rector. Other family members who graduated from UD include sister Mary Ann Klonne ’71, and brothers David Fitz ’68 and Michael Fitz ’83.

Brother Ray later earned a master’s degree and doctorate in electrical engineering from the Polytechnic University in Brooklyn, New York. When he returned to UD in 1968 to become a faculty member in the School of Engineering, he began thinking about ways he could apply his training as an engineer to social justice concerns. He applied mathematical and computer modeling to address issues including neighborhood segregation in Dayton, world hunger and rural development projects in sub-Saharan Africa.

In 1978, Fitz was selected to become the University's 17th president. He was the youngest president in school history, beginning his term in 1979 at age 39.

“Because I was named president at a pretty early age, I had a lot of learning to do,” Fitz said. “I was fortunate to have some time before I took over to look at how other colleges and universities were managed and observe some of the good things that were happening there. But the social justice issue was always in my mind as we thought about what we were going to do on UD’s campus and how it needed to blend with best practices of higher education.”

“Because I was named president at a pretty early age, I had a lot of learning to do.”

While building a national reputation for UD as one of the nation’s top Catholic institutions, Fitz and a skilled administrative team were the driving force behind the Genesis Project, which helped transform the Fairgrounds neighborhood between UD and Miami Valley Hospital into a vibrant place to live and work. The area’s revitalization triggered redevelopment and an economic boom for Brown Street, the University’s main thoroughfare.

“I think there were a lot of questions about the direction the University was going to take in the 1980s and ’90s, especially in relation to the larger Dayton community,” said Sandra Yocum, a UD religious studies professor and University Professor of Faith and Culture. “Nationally, there were some institutions at the time that were perceived as trying to isolate themselves from the wider community, but Brother Ray made a very conscious, deliberate decision that was not what UD was going to do. Isolation from the wider community was certainly not Marianist and it was certainly not Catholic in the best sense of Catholic social tradition.”

By leaning into the perspective of the University as a community partner versus a “savior on a white horse,” Yocum said, it put UD on a trajectory of community engagement that continues today.

His expertise was tapped by the Church, too. In 1990, Fitz served as a U.S. consultant during the development of Ex corde Eccleisiae, Pope John Paul II’s apostolic constitution to strengthen the religious identity of Catholic colleges and universities.

Fitz didn’t shy from taking a strong stand on topics considered controversial, such as issuing a statement affirming the human dignity of all people that included members of the LGBTQ+ community at UD.

“This was something he asked us to do, to go and talk to different groups to get their perspective,” said Yocum, who was asked to help draft the statement along with other religious studies faculty. “This was one of our earliest statements, and they’ve been much improved since, but this was a big deal since there were controversies on other campuses about this issue. He really wanted this to affirm that we were welcoming to all people.”

Bringing everyone to the table

After stepping down as UD president in 2002, he moved into a position as Father Ferree Professor of Social Justice — a professorship named for his mentor — in the Fitz Center for Leadership in Community, a center the University named in his honor that year. The Fitz Center represents a lasting legacy and a continuation of his work to create partnerships among neighborhood, community nonprofit and government organizations and associations.

“Ray reminded us that the focus was educating leaders who build community, as opposed to community engagement simply for its own sake.”

“Brother Ray’s work as Ferree professor served to focus the mission of the Fitz Center and integrated that mission with the principal characteristics of Marianist education and with Catholic social tradition,” said Paul Benson, provost and executive vice president of academic affairs. “Ray reminded us that the focus was educating leaders who build community, as opposed to community engagement simply for its own sake. And the approach was to build longstanding, relationship-based community partnerships across the city that would build upon the assets and perspectives that each partner brought to the table. Brother Ray’s work as a faculty member was, at once, empirically driven, relationally guided and mission grounded.”

As Ferree professor and chair from 2002-19, he fostered collaborations with community and church leaders on generational poverty-reduction strategies, as well as listening sessions in West Dayton on the Catholic Church’s role in alleviating racial injustice.

“What I admire so much about Brother Ray, and he will say this himself, is how much he has come to understand racism and racial injustice and how they’re really entrenched into community issues in ways he didn't fully understand when he started doing this work,” Yocum said. “He understood this had to be addressed. He admits he has tried to educate himself and respond in ways that are helpful and in response to the community.”

At 80, Fitz continues to serve UD and the Dayton community. Whether through his classes, his presidential role or his position as a community leader, Fitz has worked to embrace the Marianist philosophy of bringing everyone to the table.

“You can’t build community without dialogue.”

“One of the beliefs of the Marianists is that dialogue is important,” Fitz said. “You can't build community without dialogue. On a University campus, we have lots of diverse viewpoints and approaches. I think it's very important. We got through some difficult times just by asking people to come to the table and work things through.”

Fitz received numerous honors for his work in the community and at UD. In addition to the Fitz Center for Leadership and Community, the University in 2014 named its facility at 1529 Brown Street Raymond L. Fitz Hall. Fitz was named to the Dayton Walk of Fame in 2016, and the Montgomery County Family and Children First Council honors a community leader for his or her work with children and families annually with its Brother Raymond L. Fitz, S.M., Ph.D. Award.

“If I’ve been able to do anything good for the University, it’s because so many people have supported and challenged me as I learned how to become a better leader.”

“We talk about UD as both a supportive community and a challenging community,” Fitz said. “If I’ve been able to do anything good for the University, it's because so many people have supported and challenged me as I learned how to become a better leader.”

Leading with a servant's heart